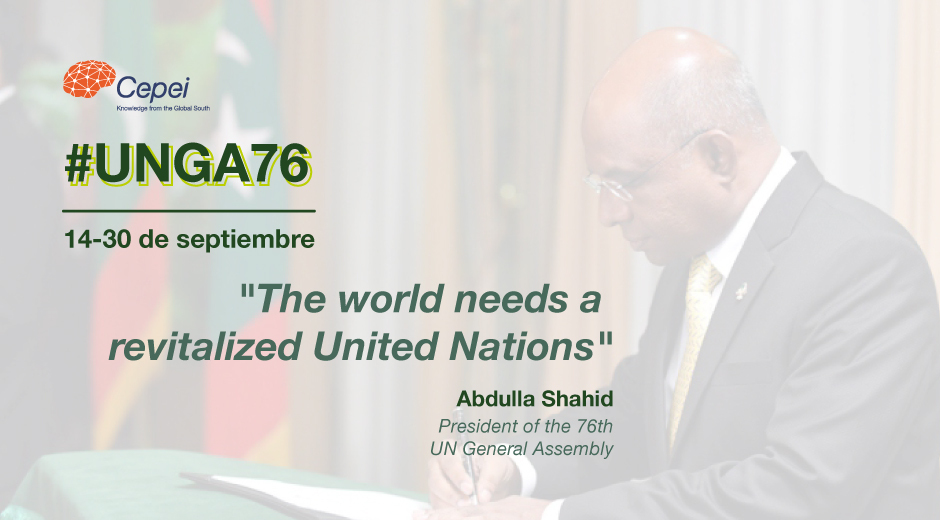 This approach is in line with the regional reform proposed by the re-elected Secretary General, António Guterres, whose mandate has focused on “making the UN’s work more efficient through the cohesion of the sustainable development policies and functions of the system’s agencies with a presence in the different countries” [own translation].

The pandemic further underscored the need to reform the UN Development System created over 70 years ago. A revitalized United Nations that adapts to a new multilateralism “…where knowledge flows from all sources, decision-makers really listen, and where evidence-based decision-making and decision-making become synonymous [own translation].

Since 2019, Cepei has presented several analyses and provided actionable recommendations to the Executive Office of the Secretary-General to ensure that the reform at the regional level is implemented effectively and efficiently and that the UN’s work in the five regions is collaborative, open and effective.

Cepei’s recommendations to the regional reform

2021 has been the year for implementing the regional reform, through the Regional Collaboration Platforms and the Knowledge Management Hubs, two mechanisms that emerged from the mapping of regional assets.

Cepei’s commitment to impact change towards sustainable development in the countries of the Global South made it possible to summarize the actions needed to reform the UNSD in eight recommendations:

Cepei has supported the implementation of the regional reform and, with the support of the Konrad Adenauer Stiftung Foundation, mapped the assets of the Regional Offices and Agencies operating in the five regions of the organization to provide evidence-based recommendations. The latest analysis shows how essential regional collaboration is becoming to Build Forward Better.

Mapping of the UN regional assets

This document provides an analysis of regional assets. It offers a holistic view of the UN’s work in the regions, and identifies who is doing what and where.

Roll-out of the Regional Reform: State of play, bottlenecks and aspirations

Assessment of the UN Development System progress on the regional reform roll-out.

Current challenges faced by UN Development System entities in learning to work together in new ways, and evolving towards a forward-looking collaborative framework, for which strong leadership is essential.

Aggregated available information on the UN Development System regional reform to enable the UN system and its external stakeholders to take inventory of the progress made thus far and identify opportunities going forward.

Cepei provides special coverage to the United Nations 76th General Assembly and the General Debate to be held from September 21-27, focusing on the speeches and needs of Latin America and the Caribbean countries and their post-pandemic recovery process.