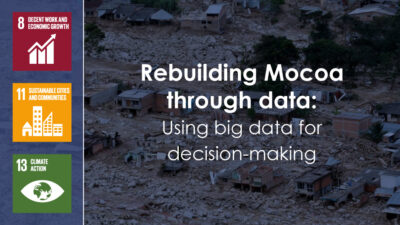 How can big data contribute to decision-making for risk managing?

Data Republica launches a new data story, with the support of Cepei, Telefónica Movistar and LUCA. On April 1, 2020, on the occasion of the tragedy that the Colombian city of Mocoa experienced in 2017, this story will be launched on the platform www.datarepublica.org, and on the following social media accounts: @infoCEPEI @Telefonica_Col and @ LUCA_D3.

Through the use of big data and the analysis of mobile phone data, the story highlights the migratory flows (internal and external mobilization processes) that occurred in Mocoa during and after the tragedy, suggesting to the institutions in charge of risk management and attention to natural disasters, the importance of building partnerships with data producers -such as the private sector- that contribute to decision-making in crisis or emergency situations for a timely attention to the population.

During the early hours of April 1, 2017, the Colombian city of Mocoa experienced an unprecedented tragedy: the heavy rains that on that night exceeded the city’s monthly rainfall records, caused the overflow of the Mocoa, Mulato and Sancoyaco rivers, generating mud flows that affected the urban area.

The main repercussions of this tragedy are evident both in the numbers of dead, missing and victims and in the social infrastructure affected, including damage to roads, bridges, homes, electricity supply networks and drinking water, among others. The torrential avenue hit 48 rural and urban neighborhoods in the municipality, 6 totally destroyed.

However, there are other effects that were not as evident as the previous ones, but that did have major social and economic implications, related to mobilization processes of the victims to other municipalities, who experienced poverty, unemployment and lower quality of lifetime. It is presumed that more than half of the population was displaced.

To obtain information on what happened during the Mocoa tragedy and to understand how many people migrated and which were the final destination areas and cities, Cepei, Telefónica Movistar and LUCA (Telefónica Data Unit), joined to carry out a mobile data analysis.

The analysis was applied to three stages: before, during and after the natural disaster. In these stages, and through the use of non-traditional data sources, such as mobile big data, the following was investigated:

1. The background of the tragedy

2. The factors that increased the risk of the natural disaster

3. Internal mobilization in a segment of the city where the greatest damage occurred

4. Displacement to municipalities and cities during the months after the tragedy

The team involved analyzed the mobile calls records made between March 26 and July 31, 2017, identifying a mobilization of 45% of the population in the days near the tragedy.

One possible mitigating factor associated with this disaster was the high deforestation rate that the municipality had been presenting: invasions of land in the vicinity of rivers and the construction of illegal levees to dry up wetlands. According to IDEAM (2017), Putumayo was part of the six departments that accounted for 81% of natural forests loss in the country.

During the first 15 days of April, the Putumayo municipalities near Mocoa and those belonging to Nariño, Huila and Bogota, showed a special influx of population from Mocoa.

The non-returning situation of local population to Mocoa, suggests that the minimum quality of life conditions projected in the short term where not guaranteed, within the framework of Mocoa’s recovery strategy, that is directly related to goal 8.3 of the Sustainable Development Goals (SDGs), “Promote development-oriented policies that support productive activities, decent job creation, entrepreneurship, creativity and innovation…”.

The use of non-traditional data sources represents a valuable input for planning processes and for decision-makers -local and national authorities- when facing a tragedy like the one that occurred in Mocoa. But more importantly, by allowing the measurement, analysis and monitoring of social, political and economic problems, from a partial perspective, data becomes an indispensable tool in risk management and in the prevention of this type of disasters.

Check out the data story in Data Republica

To carry out this research, Cepei had the support of the International Development Research Center (IDRC) within the framework of the BD4D initiative, Big Data network for Sustainable Development