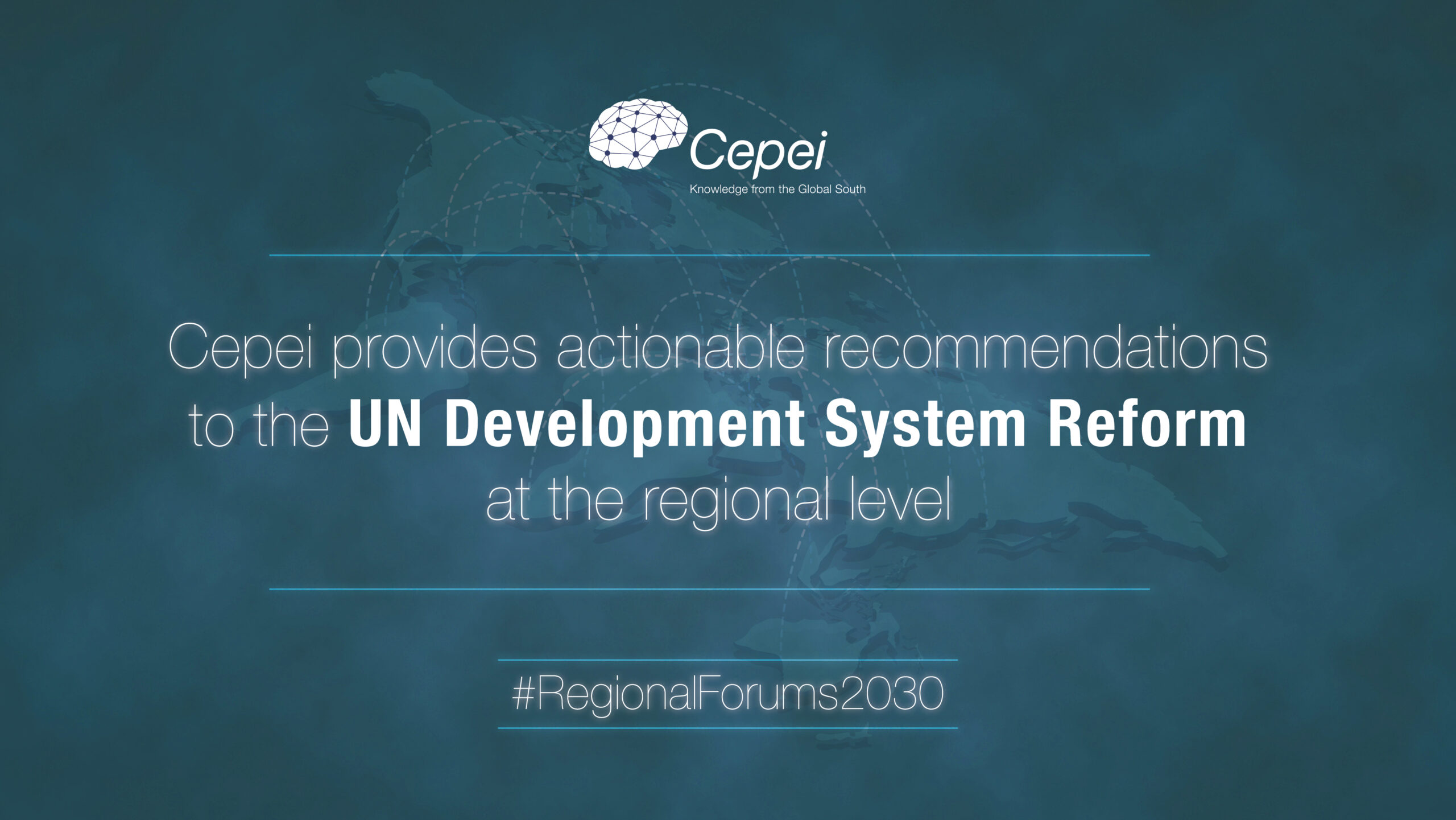 Since 2017, António Guterres, current UN Secretary General, has shown great interest in reforming the UN Development System, hoping the premise of leaving no one behind is fulfilled in 2030: “With the structural aspects of the reforms now well consolidated, it is imperative to keep the foot in the pedal to achieve the cultural change we need for greater collaboration across pillars and tangible results for people on the ground,” stated Guterres.

Sustainable development has become the greatest challenge nowadays, as we move towards a social, economic and environmental balance to achieve a more prosperous world. Since 2019, the Centro de Pensamiento Estratégico Internacional (Cepei), whose mission is to impact change towards sustainable development in the countries of the Global South, provided a series of actionable recommendations to reform the UN Development System geared towards improving its impact and opportunities in the regions. The role of the regions -long overlooked and forgotten-, could now become critical to deliver on the SDGs progress and responding and recovering better from the effects of COVID-19.

The world cannot understand and manage issues like migration, water, security, natural disasters, trade or pollution, if we don’t value the regions. The UN cannot solve or contribute to situations and challenges if it goes with a very narrow vision of countries’ realities. This background has made it quite clear for us, that the regional and sub-regional levels should by no means be downgraded. We envision a future for the UN at the regional level that is collaborative, innovative, open, and effective. The UN must prove change is possible, with determination and clarity of vision.

What did Cepei find regarding the UNDS reform at the regional level?

With the objective of having solid expertise for a more inclusive reform process, Cepei conducted research accompanied by an interdisciplinary group of experts from across the development spectrum, who analyzed and presented practical strategies, effectively translated into concrete and action-oriented recommendations for the regional UNDS reform process. Our findings can be read in the most recent report (Mapping of the UN regional Assets, January 2021), summarized below:

What documents has Cepei published?

In 2019, Cepei and the Executive Office of the UN Secretary General established a partnership to conduct research and provide an independent report, with mappings and recommendations. Our research team visited all five UN regions -at least twice- to conduct a dialogue with UNDS members at the regional level, governments, and other stakeholders. In total, more than 600 people were involved and more than 30 multi-stakeholder meetings were convened.

Four policy briefs presented and published by Cepei with the support of the Konrad-Adenauer-Stiftung Foundation, analyze the way the UNDS currently operates, and give recommendations on how it should work after the reform is implemented. They should be read in chronological order, so as to understand how the concept of sustainable development should be transversally integrated into the work of the UN in the regions.

Cepei prepared a second report as the main input for the Member States responsible for supervising and implementing the UN regional reform.

The third report presented by Cepei contains a series of thoughts addressed to Member States, regarding the UNDS reform at the regional level.

During that year, Cepei nourished the information process of the Member States with evidence, analysis, and recommendations.

The UN Regional Reform proposed by the Secretary General should be embraced by the Member States because it provides a unique opportunity to achieve a system that works as a team, with common objectives and concerted actions.

In 2021, Cepei published a regional assets analysis, providing a holistic view of the UN work in the five regions (Europe, Africa, Asia Pacific, Arab Countries and Latin America and the Caribbean), to understand what the regional work is about, by mapping the assets and identifying who is doing what and where.

The Regional Forums on Sustainable Development and the UNDS Reform

The 2021 Regional Forums on Sustainable Development (Arab Countries, Europe, Africa, Latin America and the Caribbean and Asia Pacific) held in March, go in hand with the vision on how the UNDS Reform can advance and join efforts to overcome the crisis generated by the COVID-19 pandemic. Cepei seeks to contribute to the Regional Forums, publicizing its work on the UNDS Reform. We believe the Forums are spaces to nail down ideas and actions regarding the regional level, leading to a more capable, effective, efficient, and accountable UN system in compliance with the 2030 Agenda and the SDGs. Cepei will continue to promote a more inclusive reform process, and will be working on a new report on the way forward, while supporting an ongoing dialogue between UNDS regional representatives and experts from around the world.

Follow Cepei’s coverage of the Regional Forums on our social media channels with the hashtag #RegionalForums2030: