On the occasion of the 76th General Assembly of the United Nations, Cepei joins UN Secretary General’s call for Building Forward Better 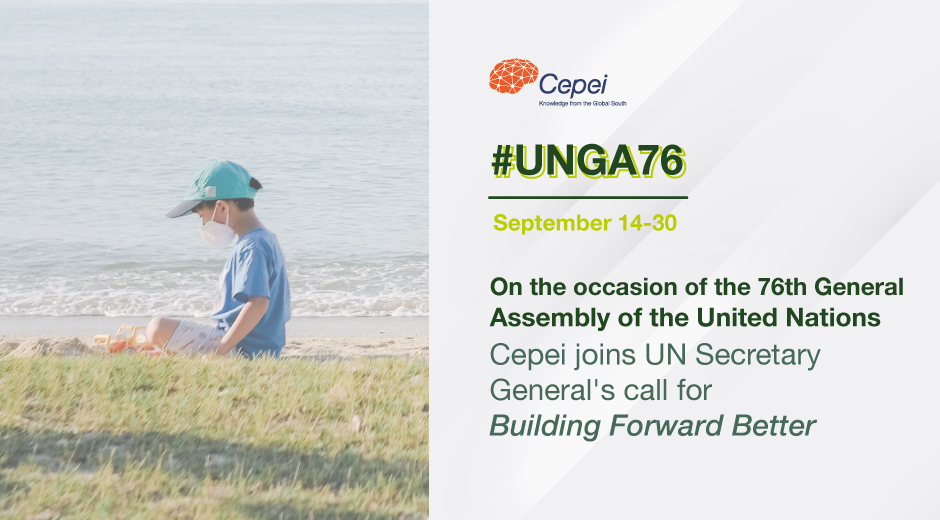 Every year UN Member States meet to discuss international issues, multilateralism and the most pressing global social, political and economic needs at the United Nations General Assembly, the UN’s highest deliberative body. The pandemic has changed the world and now there is an urgent call to Build Forward Better for new generations, equity and the planet.

This September 14, the 76th United Nations General Assembly opens its term which will run until September 2022. Mr. Abdula Shahid, Minister of Foreign Affairs of the Maldives, was elected as the President of UNGA 76 and has proposed as the main theme of the sessions: “Building resilience through hope – to recover from COVID-19, rebuild sustainability, respond to the needs of the planet, respect the rights of people, and revitalize the United Nations”.

Since the adoption of the 2030 Agenda, Cepei has been monitoring the main outcomes of the UN General Assembly and the speeches delivered by the heads of Latin American and Caribbean delegations. This year, Cepei promotes the importance of including multiple sustainable development actors in the implementation of the 2030 Agenda and the Sustainable Development Goals, in order to Build Forward Better for post-pandemic recovery.

Building Forward Better for those who will succeed us in time

António Gueterres, Secretary General of the UN, launched a call to “Build Back Better“, an expression that later became “Build Forward Better“: To build futures guided by progress towards sustainable societies, fulfill the commitment to the 2030 Agenda and strengthen solidarity with those who will succeed us in time.

In order to set the debate and perspectives of UNGA 2021 and the General Debate at its 76th session, as well as to Build Forward Better in the Latin American and Caribbean region, Cepei has prepared three publications with detailed information for those interested in following up on this term:

Cepei is a data-driven independent think tank established in 2002 and headquartered in Bogotá D.C. Cepei runs on diversity and the creativity of its multidisciplinary team of issue experts and partners worldwide.