Why Member States should support the UN regional reform 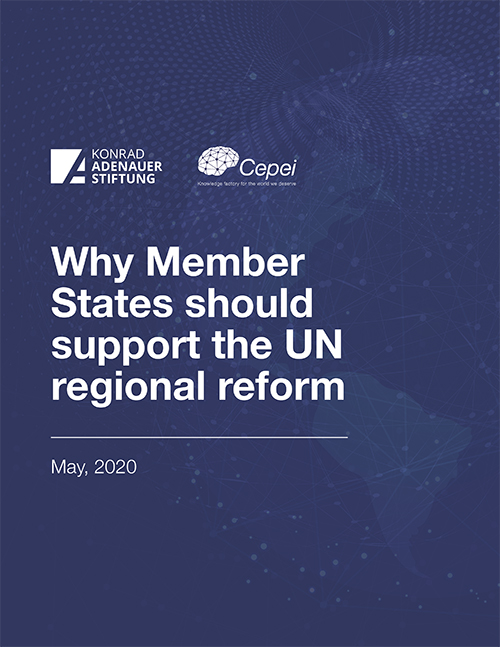 The UN Regional Reform proposal by the Secretary-General deserves to be supported because it brings a unique opportunity to achieve what Member States have sought for many years: one system working together, with common goals and concerted action. If successful it could lead to a UN system better able to deliver effectively, efficiently and accountability, to progress 2030 Agenda on the ground.

This series of papers looks at four aspects of the Reform. It is intended to help Member States understand them and pro-actively support them.

Before and after: How the UN regional reform will change things in practice

How does the United Nations regional level work today, and how will it work after the reform? This paper shows the potential of the five recommendations to achieve greater effectiveness and efficiency of the United Nations Development System at the regional level. The regional reform focuses on issues where improvements and rationalization are necessary and possible, to increase the system’s capacity to support the work of governments to achieve the SDGs.

Renewing the model of engagement: What role for Member States?

The UN system’s reform could result in financially smart and result-oriented projects with impact on the ground to fully support countries to achieve the SDGs. But Member States need to actively engage. They need to renew their model of engagement with the UN system to promote the consolidation of partnerships among the UN entities. This paper explains how. Issue-Based Coalitions give the opportunity to bolster collaboration across actors operating in the international sustainable development system and should be at the center of the UN system’s renewed engagement model.

Building momentum: The Decade of Action and Delivery and the UNDS regional reform

Try to imagine a world where purpose meets focus. The UN reform complements the commitment to action and delivery of action so urgently needed to keep the promises of the 2030 Agenda. The conjuncture between these two major multilateral processes is a striking eyeopener. They both ask for renewed regional action. They both prioritise impact. This paper encourages Member States and the UN system to use this moment to drive SDG delivery and respond to rising challenges across the world.

Win-win: How the regional UN reforms will lead to cost-efficiency

Cost efficiency is one of the goals of these reforms, but as Cepei criss-crossed the world interviewing hundreds of people in and around the UN system, we found that people expected them to be costly. This paper is about how spending at the regional level can be more cost efficient. But more cost efficient does not mean cheaper. In fact, if successful there will be a strong case to increase spending at the regional level to support increased, cost-efficient, impact. Some changes are fairly easy to instigate, others are more difficult.

This website uses cookies to improve your experience while you navigate through the website. Out of these, the cookies that are categorized as necessary are stored on your browser as they are essential for the working of basic functionalities of the website. We also use third-party cookies that help us analyze and understand how you use this website. These cookies will be stored in your browser only with your consent. You also have the option to opt-out of these cookies. But opting out of some of these cookies may affect your browsing experience.
Necessary Always Enabled

Any cookies that may not be particularly necessary for the website to function and is used specifically to collect user personal data via analytics, ads, other embedded contents are termed as non-necessary cookies. It is mandatory to procure user consent prior to running these cookies on your website.