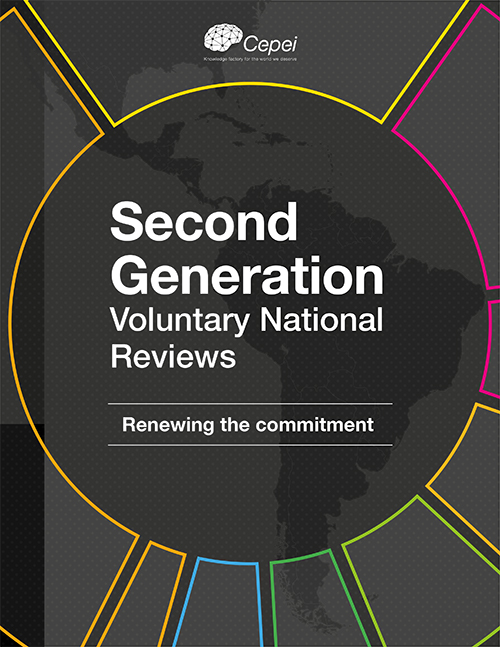 This analysis of Cepei seeks to contribute to the debate of good practices in the preparation of second and third Voluntary National Reviews, which countries present each year to the United Nations High-Level Political Forum on Sustainable Development.

Find the main findings of the analysis and the reasons that motivated it, information on the review and monitoring scheme of the 2030 Agenda, an introduction to the Second Generation VNRs and 9 recommendations for its elaboration.

To this extent, a second review that only accounts for the current situation, as a first review would do, is not the same as a second generation review, which reports processes and cycles.

After carrying out an analysis of the second and third reports submitted by the countries before the United Nations High Level Political Forum between 2016 and 2019, Cepei identified areas in which it is necessary to work to strengthen the development of second generation VNRs, such as:

Therefore, with the aim of contributing to the discussions on best practices for the preparation of second and third Voluntary National Reviews, this work also presents 9 recommendations for their preparation, to ensure that they can be considered second generation VNRs:

1. The cycle perspective: It implies not only assuming that the review must be presented as a continuity of the previous one, tracing all the bridges that this expressly requires, but that it will be the starting point for future reports, so the implementation commitments that the Governments assume and the variables that will be used to measure their success should be clearly expressed.

2. VNRs should inform processes: If the initial reports of each country fulfill their objective by showing the existing situation, the second generation reports must present advances, stagnations and setbacks with respect to the initial situation.

3. Contexts change, vulnerable groups change. The work carried out by the States to achieve Sustainable Development within the framework of the 2030 Agenda produces changes in their societies. These changes could be in turn generating modifications with respect to the most vulnerable groups or those that are being left behind. Second generation VNRs should pay special attention and identify whether the processes that are carried out to achieve the SDGs produce changes in the most vulnerable groups or if as part of the implementation, there are new groups that are at risk of being left behind.

4. Democratization of the VNR: Second-generation VNRs should allow non-state actors to assume the drafting of short chapters in which they express their own opinion on the evolution of the implementation of the SDGs at the national level in the period between reports. It is not necessary for the government to “voice” the social actors, but simply to allow them to use the one they already have.

Find other recommendations in the full report

This website uses cookies to improve your experience while you navigate through the website. Out of these, the cookies that are categorized as necessary are stored on your browser as they are essential for the working of basic functionalities of the website. We also use third-party cookies that help us analyze and understand how you use this website. These cookies will be stored in your browser only with your consent. You also have the option to opt-out of these cookies. But opting out of some of these cookies may affect your browsing experience.
Necessary Always Enabled
Necessary cookies are absolutely essential for the website to function properly. This category only includes cookies that ensures basic functionalities and security features of the website. These cookies do not store any personal information.
Non-necessary
Any cookies that may not be particularly necessary for the website to function and is used specifically to collect user personal data via analytics, ads, other embedded contents are termed as non-necessary cookies. It is mandatory to procure user consent prior to running these cookies on your website.
SAVE & ACCEPT